Fears about technology displacing jobs are unfounded. Historically technology has created more jobs than it has erased. Clearly, there’s a complex interplay of factors, such as the way climate change is creating jobs in “green” industries. However, it’s also obvious that the skills we need to be a success are changing. Here, three industry experts from Asia talk about the shifting professional landscape in Vietnam. 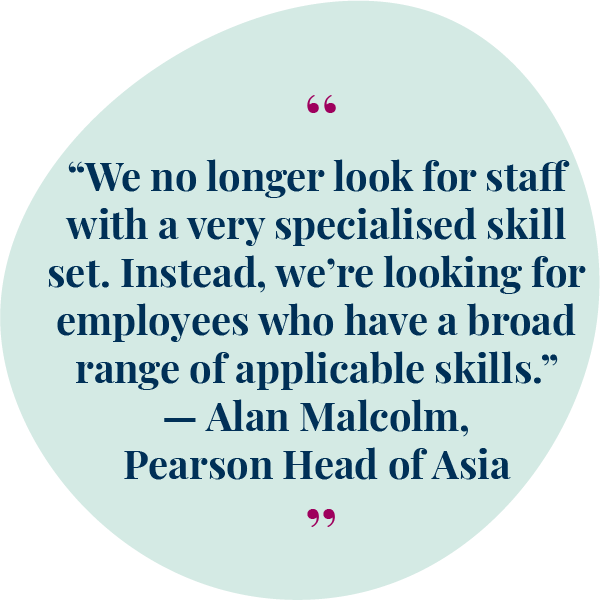 Economically, Vietnam is booming. A combination of political stability and nourishing trade deals have helped make the southeast Asian country a bright spot in the region. Another driver of growth is Vietnam’s youthful population. The average age is 35 and over half of the people of around 95 million are below 34-years-old. But as the economy grows companies are becoming more discerning about who they hire. Added to that the pool of prospective candidates has evolved. Often, the aspiration for young people in Vietnam was to live and work overseas—in countries like America, the UK, and Australia. But increasingly, young Vietnamese are looking to study and work overseas but then return home to help develop their own communities.

A broad range of skills

“We no longer look for staff with a very specialised skill set. Instead, we’re looking for employees who have a broad range of applicable skills,” Alan Malcolm begins. Currently Pearson’s head of Asia, Alan has worked in the education sector for almost 20 years progressing from sales director for Japan six years ago to head of sales and marketing for Asia to his current post as regional head. He admits that “companies might need one or two specialists across the region,” but key to employability is “flexibility.” 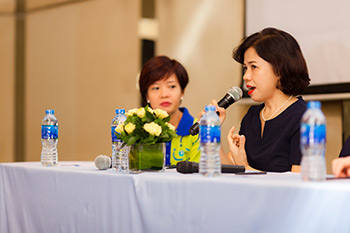 Alan is also seeing the need for skills like problem-solving and critical thinking. “People with those skills are the ones who are currently fulfilling the majority of the roles for us in Vietnam and across the region,” he explains. And active listening, particularly for sales teams, is more important than ever according to Alan. “Active listening—being able to show people that you’re listening to them—is really important, particularly in client-facing businesses. If you can show you’re engaged you’ll build a much deeper relationship,” Pearson’s head of Asia adds. 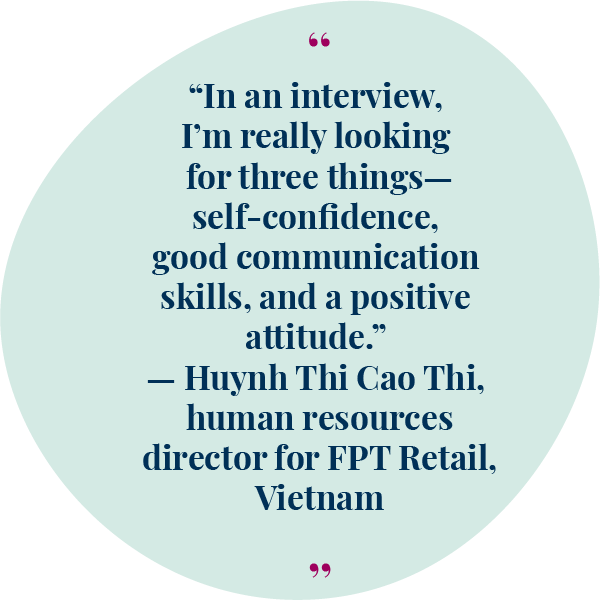 For Huynh Thi Cao Thi, a well-written CV merely gives a candidate the chance for an interview. She is the human resources director of FPT Retail. The company employs over 4,000 staff in Vietnam at their retail stores where they sell a broad range of devices from laptops to mobile phones. In her role, Huynh Thi Cao Thi engages with two kinds of prospective employees: salespeople for their stores and administrative staff who support their sales teams.

“Of course, a CV is still important, it’s the first thing we use to screen candidates but in an interview, I’m really looking for three things—self-confidence, good communication skills, and a positive attitude,” she explains.

Another focus of the training programs developed by Huynh Thi Cao Thi is time management. “That’s the focus of one of the key courses our training centers deliver,” FPT Retail’s director of human resources explains. “Perhaps our staff have never been instructed in this before, but arranging their schedule and being able to meet deadlines is crucial,” she adds. 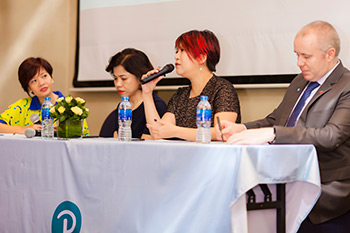 Winnie Lam agrees. She also looks for good time management skills and flexibility in her team members but, she feels, it’s not just new hires and graduates who need to develop their skills. She thinks even experienced staff need a regular refresher. Winnie is the chief operating officer for Colliers International Vietnam. She has acted on the board of CanCham Vietnam, for the Canadian chamber of commerce, and for the Hong Kong Business Association in Vietnam, as well as being the director for the TMF Group and AB Horizon Vietnam.

Winnie sees that a fixed skill set is liable to outdate a prospective candidate’s opportunities for success in the job market quicker than ever. “There are a lot of new titles and obviously lots of new functions that people are performing,” Winnie muses, “so even experienced people like me need to learn and relearn otherwise we won’t be able to access new positions simply because things are being done so differently.”

Winnie has also noticed that her staff are less observant than before, perhaps because of their over-reliance on technology. “People are so focused on the screen they don’t realize what’s happening around them. There are times I want them to drop their devices and just be present and aware of what is happening,” she says. 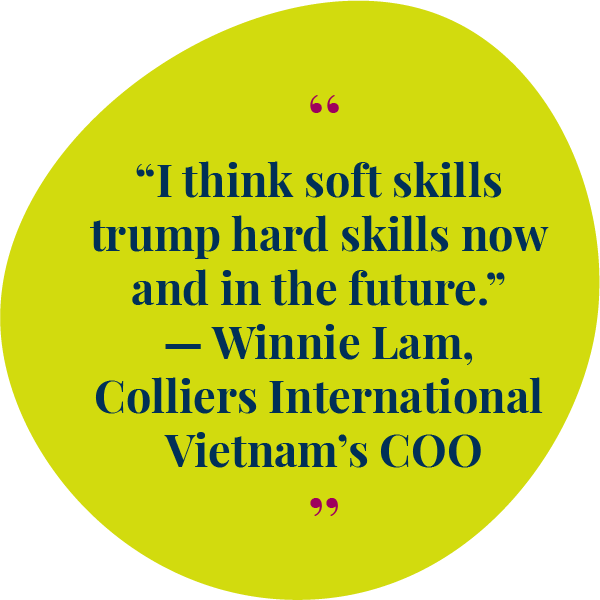 Colliers International Vietnam are also committed to training staff to develop their soft skills while encouraging self-study in hard skills. “We want our staff to seek out learning in hard skills themselves. But we actively train soft skills because I think our staff need a model that we can expose them to because they need to understand clearly what soft skills should look like,” Winnie Lam adds. “I think soft skills trump hard skills now and in the future,” she smiles finally. For more information on Future Skills please visit Skilling Up for 2020: A View from Asia.