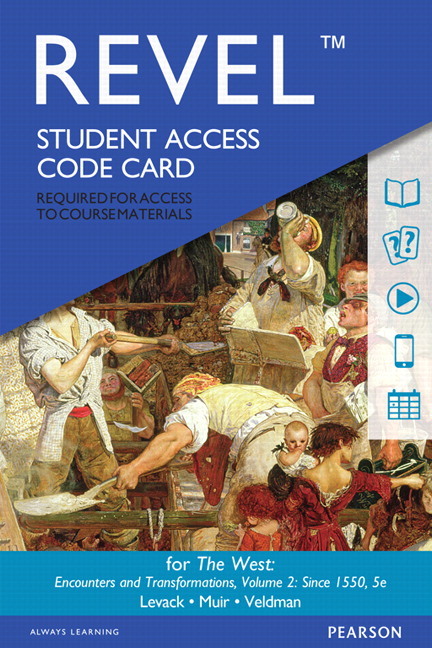 Explore the changing nature of the West
REVEL™ for The West: Encounters and Transformations examines the changing nature of Western civilization – helping students to understand how the definition of the West has both evolved and been transformed throughout history. Focusing on the central theme of cultural encounters, authors Brian Levack, Edward Muir, and Meredith Veldman explain how the West originated and developed through a continuous process of inclusion and exclusion resulting from a series of encounters among and within different groups. REVEL for the Fifth Edition offers updated and revised content to better detail the political, social, religious, and cultural history of the regions that have been, at one time or another, considered part of the West.

REVEL is Pearson’s newest way of delivering our respected content. Fully digital and highly engaging, REVEL replaces the textbook and gives students everything they need for the course. Informed by extensive research on how people read, think, and learn, REVEL is an interactive learning environment that enables students to read, practice, and study in one continuous experience — for less than the cost of a traditional textbook.

NOTE: REVEL is a fully digital delivery of Pearson content. This ISBN is for the standalone REVEL access card. In addition to this access card, you will need a course invite link, provided by your instructor, to register for and use REVEL.