This might be the most important rule in all of undergraduate chemistry! Let’s start from the beginning and go from there.

How Noble gases are related to the octet rule.

The tendency for atoms to share electrons to reach their Noble gas configuration is known as the Octet Rule.

LCAO model proves why Noble gases are so stable.

Science-y Version: Helium would have to fill an anti-bonding molecular orbital in order to bond to itself, which undoes the extra stability provided by the filled bonding orbital, so it has no reason to make a bond.

Basic Version: Noble gases don’t like to bond to anything!

The most important parts of the periodic table for organic chemistry

Octet electrons is the name we give to ALL electrons that surround an atom. These help the atom reach its Noble gas configuration.

It seems like a lot to memorize, so let’s just knock out some practice problems.

PRACTICE:Analyze the following molecules. Indicate ALL atoms that are in violation of the octet rule.

From now on let’s just agree that hydrogens with 1 bond and carbons with 4 bonds follow the octet rule, instead of multiplying them out every time.

PRACTICE:Analyze the following molecules. Indicate ALL atoms that are in violation of the octet rule. 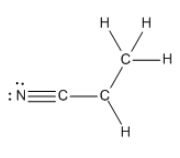 You’ll keep seeing the octet rule a bunch more in this chapter. Let’s move on.